With the Stanley Cup Final completed, the attention of the hockey world has now shifted to the offseason.

In addition to the draft and the opening of free agency, the trade market is about to heat up for the first time since last season’s deadline.

There are several big names in play this summer including JT Miller, Kevin Fiala and Jakob Chychrun. But the most intriguing name in the mix might be Alex DeBrincat, the young Blackhawks star who has suddenly found himself the subject of trade rumors.

In an ideal world, there would be 31 NHL teams lined up to take a run at DeBrincat, given his age and productivity. But the field of contenders will be a lot smaller, considering not every team has the ability to absorb DeBrincat’s salary — or give up the requisite draft picks or prospects to make this a reality.

But the Ottawa Senators could certainly fit the bill on both fronts.

Considering Pierre Dorion has made it clear that he intends to upgrade his roster this summer, there could be a potential fit between the Senators and Blackhawks.

In this column, we’ll explore a potential DeBrincat-to-Ottawa trade with perspectives from both sides.

Why the Blackhawks would want to trade DeBrincat

There are two ways of thinking surrounding DeBrincat’s future with the Blackhawks. One, he seems like the ideal player to build around. He’s still just 24 years and likely has many more 40-goal seasons ahead of him. He also seems to be on board with the organization’s rebuilding plan.

The second is that DeBrincat is only slowing the Blackhawks down by sticking around for the next three to four years. His production and contract, which he’s due for another after next season, are detrimental to a team looking to maximize cap space and trying to tank in the short term. The Blackhawks may want someone like DeBrincat again in the coming years, but not now.

It sounds like the Blackhawks hockey ops are aligning themselves with the latter way of thinking. General manager Kyle Davidson witness how his predecessor Stan Bowman never fully committed to a rebuild and it’s largely why the Blackhawks haven’t won a playoff series since 2015, aren’t anywhere close to doing so and their prospect pipeline is as depleted as it has been in the last 20 years. A complete teardown may have been avoidable if things had been done differently, but it now may be the only path back to success.

DeBrincat won’t likely avoid that wrecking ball. His time with the Blackhawks is probably growing short. The Blackhawks want to get what they can for him, and he may be at his peak value right now. And by opening up the bidding in the offseason rather than at the next season’s deadline, the Blackhawks are hopeful they can also get a larger return.

Why the Senators would want him

The Senators have made it abundantly clear they are targeting a top-six forward this offseason. And DeBrincat would check a lot of boxes for them, considering he’s a proven goal-scorer who is still in the prime of his career. The 24-year-old DeBrincat has averaged 32 goals per season since joining the league and already has a pair of 40-goal campaigns under his belt.

Since breaking into the NHL in the 2017-18 season, DeBrincat is sitting inside the top 10 in goals scored in the NHL and is hanging with some pretty elite company.

DeBrincat is also the youngest player on this list, giving credence to the idea that his next five seasons could be just as productive as these past five.

After shifting Tim Stützle to center partway through last season, the Senators are suddenly looking a bit thin on the wings. While DeBrincat is a right-hand shot, his preference has been playing on the left wing in Chicago. Regardless of where he lines up in Ottawa, there is certainly a glaring need for an injection of offense and creativity inside the Senators’ top six.

While wingers like Connor Brown, Alex Formenton and Mathieu Joseph have shown the ability to play in that role, the feeling is that Ottawa could still desperately use a game-breaking presence at the top of their lineup.

And with Brown’s status in jeopardy beyond this season, DeBrincat could represent the perfect opportunity for the Senators to upgrade their offense on the wing. Players of DeBrincat’s age and pedigree are rarely available on the trade market and if the Senators are serious about their efforts to improve their roster, they should be aggressively pursuing the young Chicago star.

What the Blackhawks would want for him

The Blackhawks are looking to compile as many draft picks and prospects as they can. The quality is important, but they’re also after quantity. The cupboard is pretty bare and they want to fill it up as quickly as possible.

The Blackhawks will undoubtedly ask for at least one first-round pick for DeBrincat. Next year’s draft is expected to be stronger, but the Blackhawks may not want to gamble that the Senators will be picking in the top 10 again next year.

The Blackhawks are especially lacking quality forward prospects in their pool. In addition to some combination of draft picks, they would probably ask for an emerging prospect, possibly someone like center Ridly Greig. The Blackhawks can put someone like him on their AHL team in Rockford and begin developing him for the coming years. 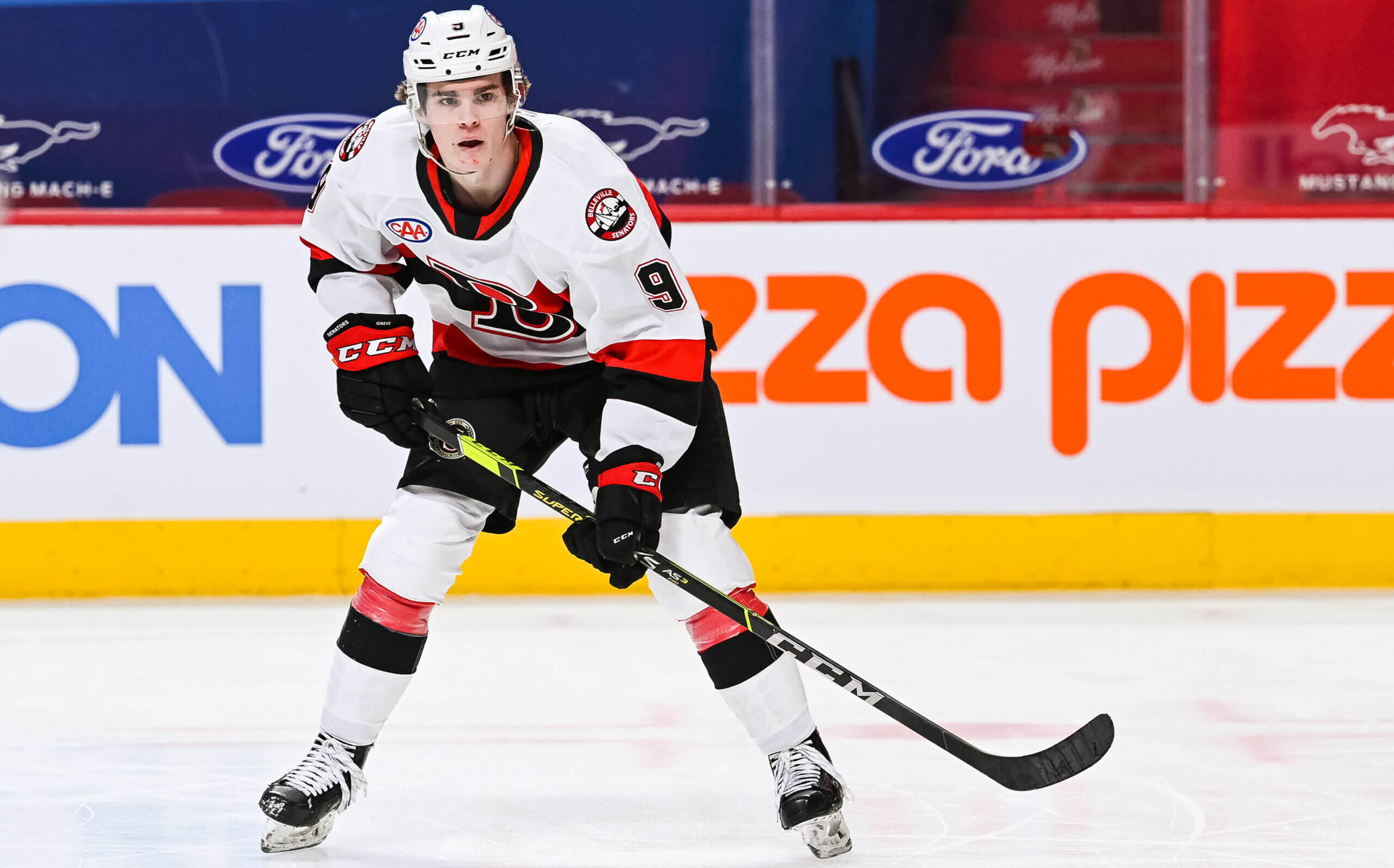 What the Senators would be willing to give up

I think it’s pretty clear the Senators are willing to part with the No. 7 overall pick in this year’s NHL Draft — particularly if a player of DeBrincat’s quality is coming back in return.

I don’t believe the Senators would also part with their 2023 first-round draft pick in addition to this year’s selection, but I could certainly see a scenario where another former first-round pick could be in play here as well.

Prospects such as Lassi Thomson, Jacob Bernard-Docker and Ridly Greig could all be realistic pieces to add to this year’s first-round selection. Ottawa general manager Pierre Dorion has often talked about packaging some of his picks and prospects to make a trade with an immediate impact on the current roster. So, it wouldn’t be out of the realm of possibility that one of these aforementioned prospects is attached to this year’s first-round pick.

How much more the Senators might be willing to part with could entirely depend on their ability to extend DeBrincat’s contract. DeBrincat is heading into the final year of his current deal, but there are a couple of interesting events in his contract.

For starters, while his cap hit is only $6.4 million this season, DeBrincat is owed $9 million in real cash and historically these have been the types of contracts the Senators have avoided. And that $9 million becomes more important when you factor in that figure will be the qualifying offer a team would have to give DeBrincat after the 2022-23 season. He would have one more year left on his deal and could potentially hit the unrestricted free-agent market in the summer of 2024.

So there is absolutely a scenario on the table where DeBrincat plays next season in Ottawa and simply takes his $9 million qualifying offer to play out the 2023-24 season and become an unrestricted free agent.

Would the Senators be willing to give up multiple assets with first-round value if they only get two seasons out of DeBrincat? Or would they need some assurances about a contract extension before they sign off on a trade of his magnitude?

It’s a tricky one for the Senators because DeBrincat has a lot of leverage given the way his contract is structured.

Is there any way Matt Murray could be included in a deal like this?

Executing a trade involving a player as talented as DeBrincat is complicated enough, so introducing a player like Matt Murray into the mix might make this even more difficult to pull off.

But there is a potential fit here when you consider the Senators would probably prefer to move on from Murray and the final two years of his contract considering they have committed to Anton Forsberg on a three-year extension.

Chicago is certainly one of the teams who could be in the market for a goaltender next season. But if the Senators want to trade Murray this summer, they will likely need to eat a portion of the $15 million owed over the next two seasons — and add a sweetener to the deal as well. So, maybe that’s where another one of those prospects, such as a Thomson or Bernard-Docker comes into play.

Murray’s tenure in Ottawa has been punctuated by injuries and illness, but he’s shown flashes of brilliance over various stretches of time. His play over the past couple of seasons probably doesn’t warrant his $6.25 million cap hit, but if the Senators were willing to eat some of that money, perhaps he looks a lot more palatable as a reclamation project.

Would the Blackhawks take Murray?

The Blackhawks’ hope wouldn’t be for Murray to regain his old form either. They don’t have to be sold on his potential. The Blackhawks are out to tank next season, and they’re expected to have an underwhelming goalie tandem to support that. They’d be fine if Murray had similar numbers to recent seasons.

After assessing the situation and evaluating the approach for both teams, here is the framework of a deal that might be palatable for both sides:

The challenge of this trade and any possible trade for the Blackhawks with DeBrincat is his next contract. His qualifying offer is already at a high price point, and there is no guarantee he’ll sign into his UFA years. That’ll give any team pause, especially the ones who would envision him being more of a rental. It might take for the Senators to have the ability to talk to DeBrincat and his agent before a trade can be moved forward. If the Blackhawks and Senators could iron out those details, there are a lot of reasons to think they could find common ground in a deal, including Murray.