Before David Perron starts skating with NHL players in Montreal every offseason, he rents ice in his hometown of Sherbrooke, Quebec. He does some skill and cardio work on his own for 30 minutes, and then his two young children, Mason and Victoria, join him and “we play around.”

Last Friday, as the three twirled around the rink, the kids asked dad a question: “Why do you still have the Blues practice jersey on?”

Every year, when Blues players dispersed for the offseason, the staff packs a navy blue jersey in their bag for summer skates, and though Perron was an unrestricted free agent, the expectation was that he’d remain with the club. That, however, changed as the start of free agency approached July 13, and the 34-year-old didn’t get a contract offer from the Blues. In an emotional parting of ways, Perron signed a two-year, $9.5 million contract with Detroit, ending his third sint in St. Louis.

Three weeks later, Perron was back on the ice, back in his Blues gear, and trying to explain to his two little ones why he was still wearing the Blue Note.

“Well, I don’t have any other gear yet,” he told them.

At that point, the only evidence around the Perron house that dad now played for Detroit was a hat and some socks that he and his wife, Vanessa, brought back from their recent trip to Michigan. The couple was there for three days, picking a home in Birmingham, Mich., about 25 minutes from the city, and a school for Mason, 7, and Victoria, 5.

Before they left, Perron stopped by a sports store and felt weird just looking around at the merchandise.

“We’re used to the Cardinals and (Busch) Stadium, and then you see the Detroit Tigers gear, it’s kind of surreal,” he said.

Perron bought Mason a Red Wings hat that’s red on the front with white meshing on the back.

“That’s not something I thought I would ever do, starting my career against (Detroit), in the same division, playing them eight times a year,” he said. “That’s going to be a lot different for me to change to red jerseys.”

After a box arrived at Perron’s home Friday night, just hours after his kids asked about his Blues practice jersey, it began to feel a little more normal.

“I see the delivery guy coming, he’s got the package with the Red Wings tape around the box, and I was laughing, ‘Oh, this is probably the jerseys I asked for last week that they’re shipping,’” he said. “I opened it up with the kids and they were pretty excited to see the new colors and the new jersey.”

On July 13, after Perron’s contract with Detroit became official, The Athletic sent him a text message, asking for an interview about his departure.

“I’m gutted for sure it didn’t work out,” he texted. “I can talk either tomorrow or next day. Trying to let the dust settle.”

After a day or so had passed, Perron politely declined another interview request.

On Friday, the phone finally rang, and it was Perron.

For all practical purposes, the dust had settled, but there are still some particles in the air.

“I’m still in a little bit of shock that it didn’t work out, just kind of the way the years went,” Perron said. “I guess if you see my performance declining or something, then you’re like, ‘Maybe there’s something there.’ That’s still like raw to me. I had to let some of the dust settle and I guess I still have to let that happen.”

Prior to the start of the 2021-22 season, a team source said that Perron was offered a two-year, $8 million contract ($4 million AAV) that was declined. Another source familiar with the negotiations said it was a one-year, $4 million offer, and after a successful season, he was looking for a longer contract.

“I didn’t understand why that offer was made, but I was respectful,” Perron said. “There’s a pecking order and I understand (Blues general manager Doug Armstrong) had to re-sign Colton Parayko; he signed eight years and deserved it.

“So yeah, the progression of the young guys, and maybe (Blues coach Craig Berube) wasn’t sure about me. Maybe my performance as I get older, like you don’t want to get burned. We kind of wanted to see some things.”

In the final year of his deal, Perron netted 20 goals and 57 points in 67 games and topped all Blues scorers with nine goals and 13 points in the postseason.

There would be no contract discussions during that time, however. The Athletic reported earlier this month that Perron’s agent, Allan Walsh, and Armstrong did speak before the NHL draft in early July, but it didn’t amount to anything.

“They were talking, but it was just talking,” Perron said. “It was never really serious from what I was hearing on my end. We were just hoping to get something to think about. I’m guessing contract situations like that, you can talk for a while and eventually there’s an offer and then it gets done in a minute. But it’s not like there was anything that I was getting excited about.”

On the first day of free agency, the Blues signed free-agent defenseman Nick Leddy to a four-year, $16 million contract, and including a few other contracts, they were suddenly at the $82.5 million salary-cap ceiling.

“It’s a ‘rob Peter to pay Paul’ league right now, and we had to rob money out of the forward position to solidify the D position,” Armstrong said at the time.

Asked point-blank why he thinks he wasn’t offered a contract, Perron paused for a moment.

“That’s their perspective,” he said. “That’s fine that it’s their perspective, I just don’t buy that perspective. I mean, salary cap was a reason that was brought up, for sure, the whole time. I could see when we traded for Nick Leddy, how well he fit on the team, we had so many forwards that scored 20 goals last year, and you need a balance. (But) I don’t think it was about me or Leddy, I really don’t. I just think at the end of the day, if you want to sign someone, you do.

“After the performance, the loyalty, winning the Stanley Cup, coming back, leaving, coming leaving back, all that combined, I just felt like if you wanted someone, you make it happen, you find a way. There’s no excuse there for me. That’s what is really hurting me for sure. I’m not saying it’s going to be the right or wrong decision from the team perspective, but I just kind of felt like I commanded and earned that a little bit.

“I just felt like that was going to be an easy extension to get done over the summer. I wasn’t going to be crazy. I just wanted something where I felt respected. I see my perspective, I don’t necessarily see everything, but I truly believe in life when you want to make something happen, you do. I’m not trying to prove a point. That’s just life — if you want to get it done, you get it done.” 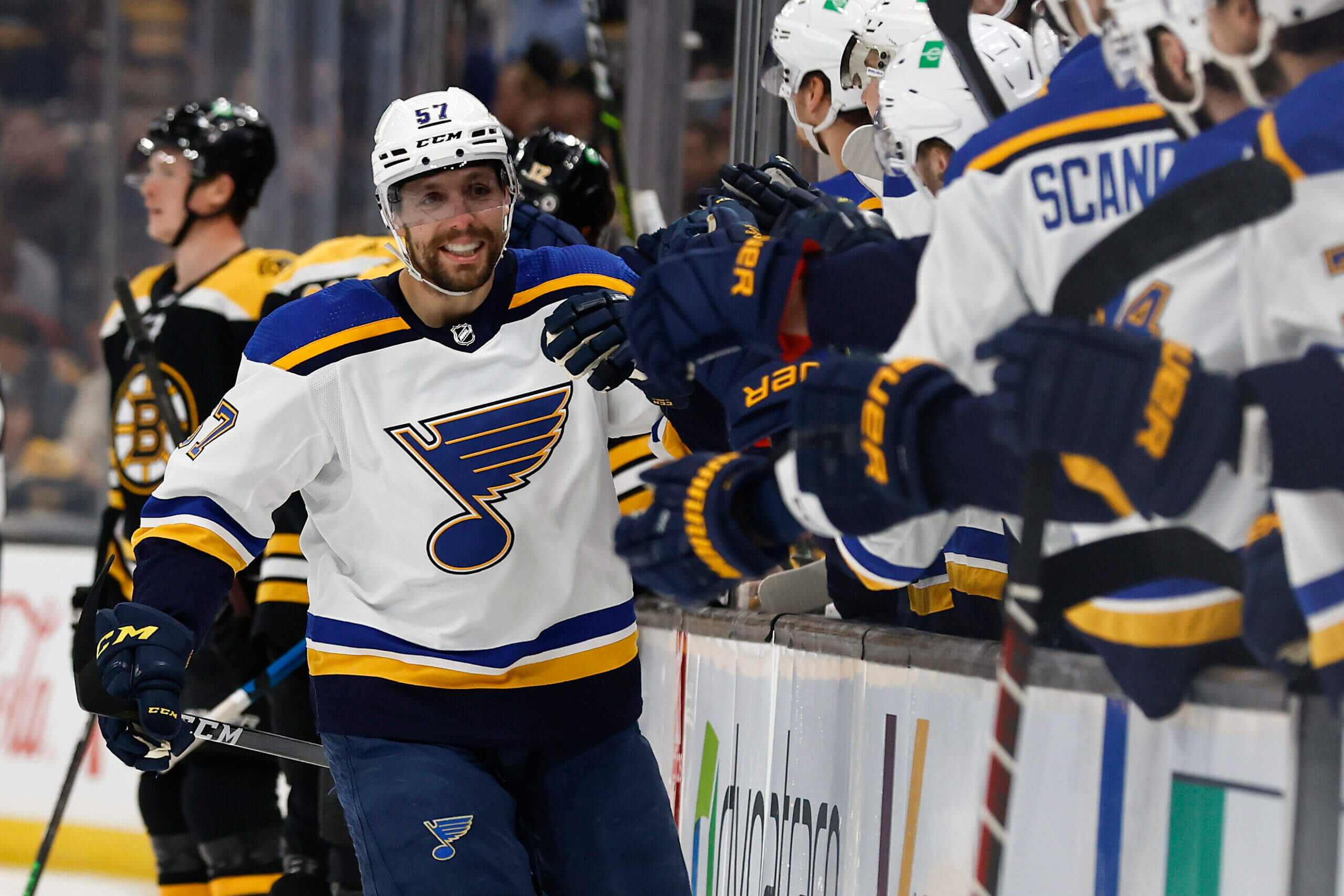 It was clear that Perron wasn’t returning to St. Louis, so now his agent was taking calls from other teams. There were four to six with serious interest, but a few of those offers were dependent on whether those clubs could sign other players. There was the possibility of more term and more money, but eventually he decided on Detroit.

“I’m 34, I’m not stupid, I know when you have a guy that’s 28, 29, 30, I don’t blame teams for looking at those guys first,” Perron said. “I signed for two years and hopefully I can help this team into the next part of their rebuild, play meaningful games, and make the playoffs. I did it in Vegas, so I have confidence I can help (Detroit) as a leader and have a team give me the confidence that if, it works out, not only stat-wise but everything, they will be open to keeping me. ”

As Perron and the Red Wings were looking like a match, his kids were attending a summer camp at Lake Memphremagog on the Quebec-Vermont border. They go three times a week and stay until 4 pm, but on this day, dad picked them up a little early to bring them up to speed on the situation.

“It wasn’t easy,” Perron said. “We brought it up to them and talked around the table. It’s tough because they love St. Louis, too. They have friends, they have the school that they love, and their hockey situation. They were crying, and that got to me and Vanessa. We were all together and it was emotional.”

Lake Memphremagog is where Perron was on his boat in 2017 when Armstrong called to notify him that he wouldn’t be on the Blues’ protected list for the NHL expansion draft. Vegas took him, marking the second time in his career he’d be forced to leave St. Louis. The first was in 2013 when he was traded to Edmonton.

Perron looked past both of those decisions when he signed a four-year, $16 million contract with the Blues in 2018 and, 11 months later, won a Stanley Cup. That makes this departure the most difficult of the three.

“It’s not even close,” he said. “The first one was tough because I was there for six years and every player dreams of being on the same team for your whole career. The second time, I felt like I had a decent season for my role, but I kind of saw what happened. This time was definitely the hardest. It’s not even close, for all the reasons that I said.

“I just felt like I had built something so special. I was performing, and I felt like I had the support of the city behind me. It takes years to do that, and I was in a spot where I had that and I didn’t want to lose that. I don’t know if I’ll ever be able to feel that way anywhere else, and that’s what’s hurtful for me. When that’s taken away from you, it’s hard.”

If Perron is in Detroit’s lineup at Enterprise Center on March 21, perhaps there will be a video tribute and a thunderous ovation. Perhaps when his career ends, he’ll sign a one-day contract and retire with the Blues. Of course, there will be Stanley Cup reunions.

But in the past few months, the relationship between Perron and the Blues has changed, as have his plans. How will it be moving forward?

“I don’t know; I’m not sure what it will be like,” he said. “You’ve got the example of Bobby Plager and all these guys — Bernie Federko, Kelly Chase, Barret Jackman, Al MacInnis, Brett Hull, Keith Tkachuk, Chris Pronger — who took pride in wearing the Blue Note and are still in town. I could’ve seen myself living in St. Louis and I just don’t know if it can happen after this. It can, but things will change in the next two years and my kids will learn to love Detroit. We’re probably going to go back home (to Sherbrooke) after all that.

“I always feel like I’m going to be a St. Louis Blue in my heart and my head. There was some frustration and some anger with the whole situation, but I think when it comes down to it, I’m going to be proud of what I did in St. Louis. I had so many phone calls and text messages from people around the city and the organization and pictures from 15 years ago or four months ago from fans. It’s not an easy business. I’m well aware of that. I guess everyone gets to this point, I just wish it would’ve been a few years down the road.”