LANGLEY, British Columbia — Mazden Leslie, a 17-year-old defenseman for the WHL’s Vancouver Giants, was idly watching television one night when he stumbled on a rerun of an old “Chicago Fire” episode and saw a familiar — if clean-shaven — face.

Leslie paused the TV, snapped a quick pic on his phone, and immediately texted it to Brent Seabrook.

Still everybody’s big brother. Even when he’s old enough to be their dad.

They call him Seabs. Not Coach, not Mr. Seabrook, not Brent. Just Seabs. It’s always been just Seabs. It didn’t take long for that comfort level to set in with the Giants; Seabrook just has that effect on people. Sure, lifelong Blackhawks fan and Giants winger Ty Halaburda admits he was a little “star-struck” the first time Seabrook showed up at the Ladner Leisure Center for a practice. But then Seabrook started doing Seabrook things — doling out nicknames, cracking jokes, making guys feel at ease, telling stories about the good old days.

“He’s so easy to talk to,” said Halaburda, who was all of six years old when his hometown Canucks beat his beloved Blackhawks in the 2011 playoffs. He’s honestly like just another guy. Just a great guy, great personality, and he’s so funny.”

Officially, Seabrook is a volunteer player development coach for the Giants. He makes the four-hour drive down from his home in Kelowna every couple of weeks to do some one-on-one work with Giants defensemen. He’ll dabble in the power play. He works with Giants head coach Michael Dyck — who coached Seabrook in the WHL more than 20 years ago as an assistant with the Lethbridge Hurricanes — to develop practice plans. He watches nearly every game online and has remote access to the Giants’ video system and offers suggestions on schemes, special teams, individual player tics and techniques.

It’s not a casual hobby for Seabrook. He takes it seriously.

“He’s very passionate, and he loves the game,” Giants assistant coach Adam Maglio said. “He works with the coaching staff and obviously he’s relatable to the players. So it’s a lot of one-on-one talks with guys, or we’ll utilize him for a team talk. He’s kind of a Swiss Army knife for us when he comes in.”

Seabrook is a volunteer because, more than three years removed from his last game in the NHL, he’s still under contract with the Tampa Bay Lightning through the end of next season. (Yes, Seabrook has a Lightning jersey with his name on it back home; he thought it’d be fun to ask for one, and Tampa Bay was happy to oblige.) Giants general manager Barclay Parneta joked that Seabrook is “the highest- paid volunteering in the WHL,” thanks to that eight-year, $55 million deal that was once the source of much consternation in Chicago.

Working with the Giants was a natural first step out of retirement. His parents lived in Tsawwassen, in the south Vancouver suburbs where the Giants practice. So when Dyck went to coach Team Canada at the world juniors last year, he asked Seabrook to fill in for him behind the Giants bench for a few weeks.

“My record is horrible from that, but I learned a lot,” Seabrook said.

“I think we went 2-9,” Parneta said with a laugh. So I immediately thought, let’s bring him back!

Now Seabrook has the coaching bug, much to his own surprise. He’s one of the head coaches in Wednesday night’s CHL/NHL Top Prospects Game in nearby Langley, coaching against Connor Bedard. On Tuesday afternoon, he was at center ice at the Langley Events Centre, leading drills, firing pucks, chatting up players, and even removing the nets afterward to make room for the Zamboni. He looked like a man comfortable in retirement. He sounded like a guy who was having fun and in a good head space.

But really, he’s a young man — just 37 years old — with his whole life in front of him. And he’s just trying to figure out how to spend it.

“It’s weird to say I’m retired, when my dad’s 66 and he’s not,” Seabrook said. But I love hockey. I’ve always loved it. I want to stay in the game, but I don’t know exactly what I want to do just yet.”

Seabrook was in tears when he called Michael Terry, the Blackhawks’ team doctor. Three months after a debilitating and deteriorating hip injury forced him into early retirement, Seabrook wasn’t getting any better. In fact, he was in agony.

Seabrook had an MRI exam. He saw a back specialist. He saw a hip specialist. Finally, he got a full-blown hip replacement, and it changed his life. A mere five weeks after the operation, Seabrook felt so good he called up his doctor and earnestly told him he wanted to return to the NHL.

But he could skate again. He could travel again. Suddenly, a second career in hockey felt realistic. He can’t do anything until his contract runs out next year, so in the meantime, he’s trying to learn everything he can about what he called “the other side” of hockey. There’s the developmental work with the Giants, and now the coaching in the Top Prospects Game. He tagged along with old Blackhawks teammate Colin Fraser to scout the Hlinka Gretzky Cup, marveling at how Fraser was projecting what these 16- and 17-year-olds would look like in a Blackhawks uniform five years down the road. And he’s still in regular contact with Blackhawks general manager Kyle Davidson, associate GM Norm Maciver and hockey-ops adviser Brian Campbell.

He’s in my office asking what the GM does. He’s out there asking what the coach is doing. He’s talking to the athletic trainer, the equipment guy,” Parneta said. He’s so interested in every aspect. He’s just seeing how everything works. It’s pretty interesting to see. I don’t know what he’s planning on doing. I just hope he’s not coming to take my job.” 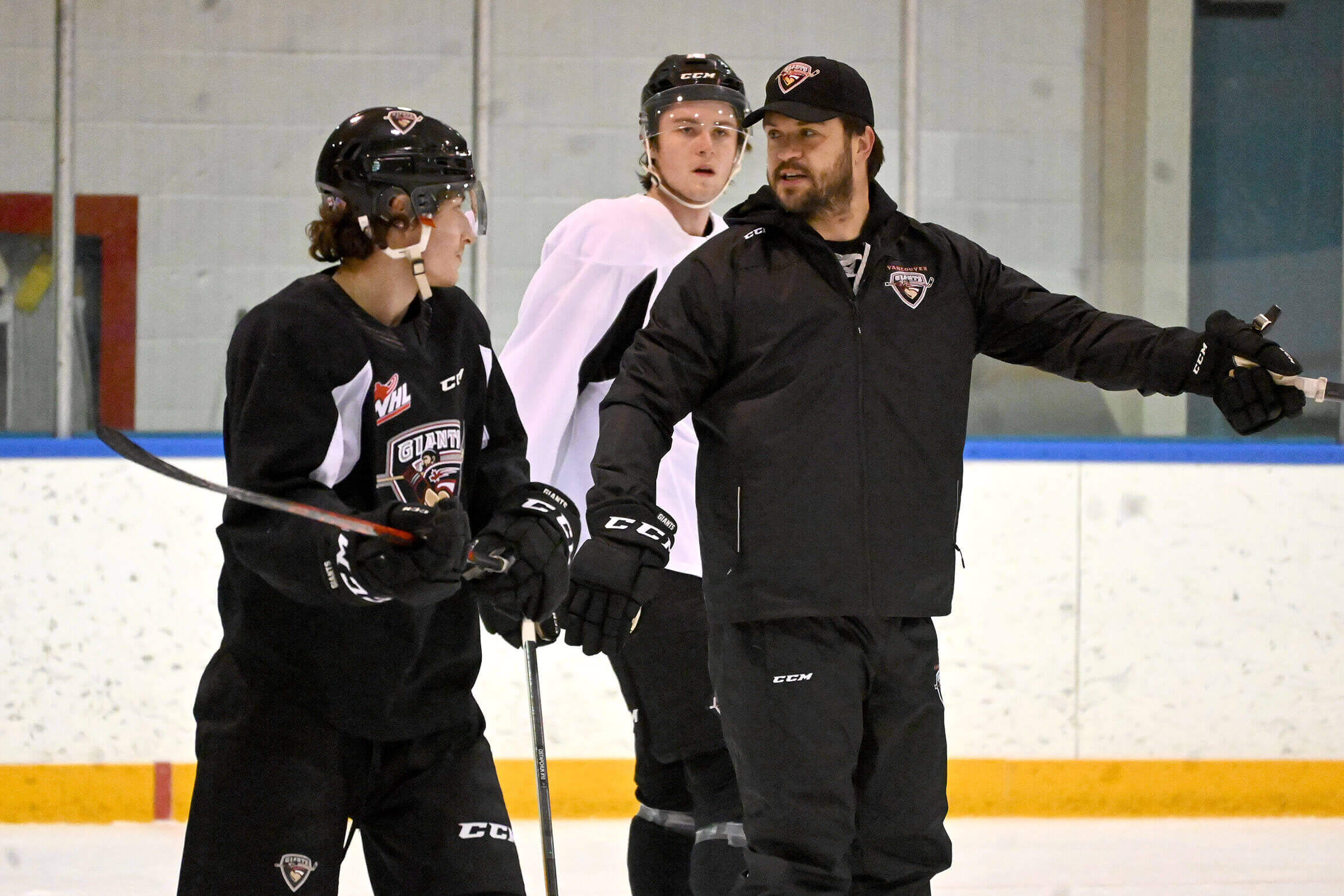 Coaching seems to be a natural fit. It’s hard to picture Seabrook grinding it out on the lonely road as a scout. He belongs in a locker room, his big voice and big personality permeating every stall. He was the beating heart of the Blackhawks for 15 seasons, and it’s no surprise he’s slipped right back into that role with the Giants, even when the players are nearly two decades younger than he is. It took him a little time to learn how to work with younger players — in the NHL, he was surrounded by proven winners who didn’t need much hand-holding — but he adapted quickly. The Giants required more teaching and more patience. He wasn’t just telling them to take away the pass while defending a two-on-one by belly-sliding; he was showing them exactly how to do that and exactly which specific angles to cut off.

But more than that, he learned to connect with the players on a more fundamental level, to reach them and instill in them a winner’s mind. Most coaches either didn’t play in the NHL or are decades past their playing days. Even Giants assistant coach Jim Vandermeer, a teammate of Seabrook’s with the Blackhawks in the late-2000s, is 11 years removed from his last NHL game.

“He’s young,” Giants forward Samuel Honzek said. “It was just a short time ago that he was still playing. But he’s also easy to talk to. He won’t bite your head off.”

“It’s been crazy having a guy like that around,” Leslie said. “He’s teaching you all the things about how to be a pro and how to stay there all these years. He’s won three Cups, so it’s pretty crazy. Anything he tells you, you have to listen.”

“It’s not just some guy telling them these things, it’s someone with real experience,” Parneta said. He’s been through it, and they know that. So if he says something, they’re like, ‘Oh, I get it.’ I could tell them the same thing and they wouldn’t listen to me. But when Brent Seabrook says it, they will.

Seabrook was already veering in this direction late in his career, welcoming a rookie Kirby Dach into his home and mentoring him throughout the season. Now he’s applying everything he’s learned — how to talk to young players, how to reach young players, how to connect with young players — to the Top Prospects Game. It’s an exhibition sure, but for all these players trying to jockey for draft position behind Bedard, the pressure is immense.

Seabrook is doing all he can to alleviate that pressure.

“It’s a game full of players who need to be put in situations to show their best,” Seabrook said. My focus is to have fun and keep them loose. They’ve got 300 scouts in the crowd, and all this stuff going on. So you try to bring the best out of them and have some fun. It’s the way I wanted to play. That’s what I wanted the locker room to be, a fun place. And I had a pretty loud voice so I was able to get it that way sometimes.”

It’s a strange thing to be prematurely retired. You feel cut off and isolated. You might not miss the daily grind and the physical toll the game takes, but you feel crestfallen with every season opener and every playoff opener that you’re not involved in. You also go from seeing your best friends every day to not seeing them at all. You feel like an outsider, and it’s not a great feeling.

After Patrick Sharp retired, Seabrook noticed they weren’t chatting very often, and it bothered him.

“So I gave him s—one day. I’m like, ‘Why aren’t we talking?’” Seabrook recalled. He’s like, ‘It’s hard to talk to you guys. You’re busy. You’re on the road. You’re in this city or that city. I think of calling you, but it’s a game day, and I don’t want to bug you. I check the schedule and I’m like, ‘OK, I’ll call tomorrow.’ But then I forget and it’s too late.’”

Seabrook understands that now. He wants to talk to Jonathan Toews and Patrick Kane more often. He wants to see how things are going under Luke Richardson. He wants — like everyone wants — to know which way they’re leaning when it comes to their no-movement clauses as the trade deadline approaches. But he mostly stays away. He went to Tuesday’s Blackhawks-Canucks game at Rogers Arena and was planning to catch up with the guys after the game, but the team was headed right to the airport and off to Calgary, so there wasn’t much time. He said he’s found that texts are more likely to be returned than calls.

That’s just not his world anymore. It was taken away from him a few years too early; The spirit was willing, but the flesh was weak, too worn down from 1,114 regular-season games and 123 playoff games. But with a new hip and a new outlook, he’s seeking out a second act in hockey once his contract finally expires.

In the meantime, he’s content to be an unpaid volunteer for a junior hockey team. Hey, man, hockey’s hockey. And “humble” is a word the Giants throw around a lot while talking about Seabrook.

He drives a pickup truck from Kelowna to Vancouver. He brushes off Parneta’s offer to have the team cover his gas. He goes out for beers with the Giants staff. He gives his phone number to every member of the Giants and tells them to call or text whenever. He sends them texts of encouragement, congratulations, or constructive criticism after games.

And he sits in the room with the boys, telling stories about Kane and Toews and Keith and the old days.

Back on the ice, back in the room, back in his element. Just Seabs being Seabs.

“I’m just trying to have fun,” Seabrook said. “The game of hockey is fun. It’s meant to be fun. And you play your best when you’re having fun. For now, I’m just happy to be around the game again.”