With the launch of Artemis I being just around the corner, NASA is upping the ante during tests that would ensure a long-term human presence on the Moon. In the recent phase of preparations, engineers at NASA’s Glenn Research Center tested the Volatiles Investigating Polar Exploration Rover (VIPER) prototype in a simulated lunar terrain. According to NASA, this was the most realistic test conducted to prepare for tough driving conditions on the Moon.

Just keep rolling!@NASA‘s Volatiles Investigating Polar Exploration Rover (VIPER) prototype recently endured the most realistic tests to-date of its ability to drive through the most difficult terrain during its mission to the Moon.

The VIPER is targeted for launch to the Moon’s South pole in 2023 with an objective to examine the Nobile crater and conclude if ice or any other potential resources exist there.

During the tests in the Simulated Lunar Operations (SLOPE) Laboratory, the engineers evaluated the rover’s unit responsible for its mobility. Called the Moon Gravitation Representative Unit 3 (MGRU3), it features motor controllers, the critical hardware in the rover’s mobility system that controls the motor’s supplying power to the rover’s four wheels. 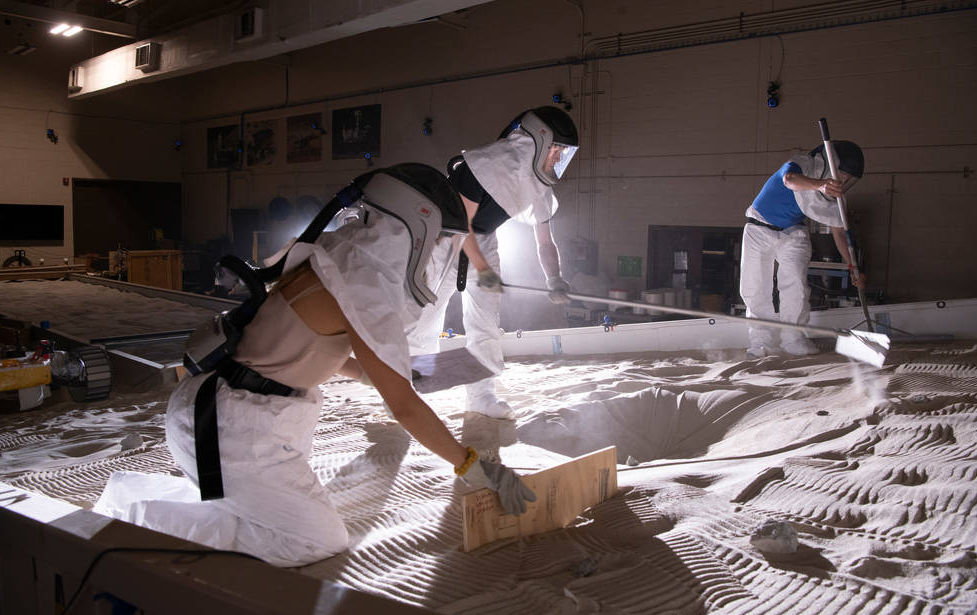 “Unlike most car engines, which uses a throttle and brake to speed up and slow down all four wheels, VIPER’s motor controllers make the rover wheels turn at the force and rate the drivers want, with extreme precision to allow for better performance,” Arno Rogg, test director and rover systems engineer at NASA’s Ames Research Center said in a statement.

In the SLOPE lab, the rover was made to traverse through fluffy lunar soil simulant without getting stuck, which helped the engineers verify the rover’s ability to navigate. The tests also helped determine if VIPER is capable of moving in an extreme sinkage environment and how much energy it would save or spend in tricky soil conditions.

Interestingly, NASA has designed the rover in a way that it can move its wheels in a special, caterpillar-like coordinated way without rotating to make itself unstuck. It would also autonomously stop moving if it approaches a slope that is too steep to climb or if it loses track of its location. “We’ve captured a lot of data with these tests about what happens when the rover wheels grind over a rock or slip on loose terrain, and any sensor drifts – when the rover gets slightly off-course,” Rogg added.