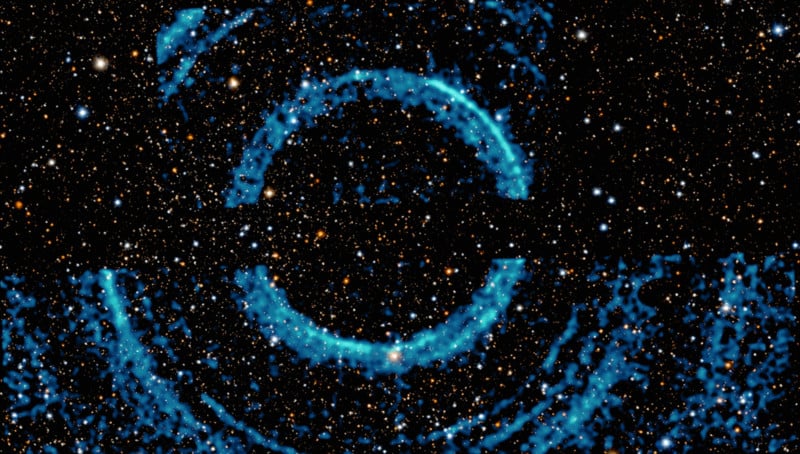 A spectacular photo of a huge set of rings surrounding a black hole has been captured by the NASA Chandra X-Ray Observatory and Neil Gehrels Swift Observatory.

The photo shows giant rings around a black hole, which is not visible itself since black holes contain no light and are thus not able to be imaged. But thanks to X-ray imaging, NASA says the photos of the giant rings reveal information about dust located in the Milky Way Galaxy, using a similar principle to the X-rays performed in doctor’s offices and airports.

This particular black hole is part of the binary system called V404 Cygni located about 7,800 light-years from Earth.

“The black hole is actively pulling material away from a companion star — with about half the mass of the Sun — into a disk around the invisible object. This material glows in X-rays, so astronomers refer to these systems as ‘X-ray binaries,'” NASA says.

The rings seen in the photo above depicting the X-rays that are bouncing off the dust in that galaxy that are scattering around the black hole in a halo pattern. As explained by an astronomer on Reddit, the best way to understand this is to compare it to the same way that a halo might form around the sun due to ice crystals in the sky. The reason the halo is visible is because there is a somewhat uniform cloud of gas and dust in between the black hole and the observatories used to capture the image.

NASA’s Chandra Observatory was launched on July 23, 1999 and has been the space agency’s flagship for X-ray astronomy. It is a telescope designed specifically to detect X-ray emissions from very hot regions of the universe, such as exploded stars, clusters of galaxies, and the matter surrounding black holes (such as the photo above), NASA explains.

“Chandra carries four very sensitive mirrors nested inside each other. The energetic X-rays strike the insides of the hollow shells and are focused onto electronic detectors at the end of the 9.2-meter (30-foot.) optical bench. Depending on which detector is used, very detailed images or spectra of the cosmic source can be made and analyzed,” NASA says.

Chandra sits in an elliptical orbit more than a third of the distance to the Moon around Earth. Its current location can be calculated through NASA’s Satellite Tracking Tutorial.