The team behind the popular Pixelmator series of image editing apps today announced that the Pixelmator Photo app for the iPhone and iPad is switching to subscription-based pricing with an update rolling out now on the App Store.

For new users, Pixelmator Photo now costs $4.99 per month or $23.99 per year, while existing users of the app will continue to have “unlimited access” without having to pay again. A lifetime purchase option will remain available for $59.99, which is significantly more expensive than Pixelmator Photo’s previous one-time price of $7.99.

In a blog post, the Pixelmator team admitted that the subscription-based pricing model is more expensive, but argued that there are “some pretty big problems” with an upfront pricing model, including slower development and a focus on new users over existing users. Among other reasons, Pixelmator also noted that the App Store does not allow paid apps to offer free trials or upgrade discounts for major new versions.

“The hope is that there are enough users who use the app regularly and feel that the annual or monthly fee is worth it,” said Pixelmator. “It looks like this is the best way to ensure Pixelmator Photo can continue to be developed long into the future.” 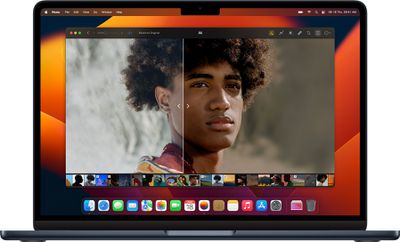 Pixelmator also provided a sneak peek at its Pixelmator Photo app for Mac, which will be a “completely native app” that is “designed from the ground up just for Mac.” Pixelmator plans to release the app late this year or early next year and says those who subscribe to Pixelmator Photo for the iPhone/iPad now will get Pixelmator Photo for Mac for free when it launches. Existing users will be eligible for a discounted subscription.

Pixelmator informed MacRumors That it doesn’t have any immediate plans to switch the standard version of Pixelmator for iOS or Pixelmator Pro for macOS to subscription-based pricing and is working on a major update to Pixelmator Pro that will be free as usual.

Apple is aiming to hold its first fall event on Wednesday, September 7, reports Bloomberg’s Mark Gurman. The event will focus on the iPhone 14 models and the Apple Watch Series 8. The standard iPhone 14 models are expected to get few changes, but the iPhone 14 Pro models will include updated camera technology, the removal of the notch in favor of a pill -shaped and hole-punch cutout, an A16…

Apple today seeded the sixth betas of upcoming iOS 16 and iPadOS 16 updates to developers for testing purposes, with the updates coming a week after Apple released the fifth developer betas. Registered developers can download the iOS and iPadOS 16 profiles from the Apple Developer Center, and once installed, the betas will be available over the air. iOS 16 introduces a revamped Lock…