TORONTO — Sometimes when you’re in the thick of a close race, you want to roll the dice.

That’s how it’s looking for CFL.ca’s Matt Cauz and Pat Steinberg, who are knotted at (20-7) for the lead in the writers’ picks race.

Like a driver sizing up the pass at the opportune time, Cauz sees a moment and is willing to stand on his own in a couple of matchups this week to try to get to the front of the pack.

If the Montreal Alouettes down the Hamilton Tiger-Cats on Thursday and the Ottawa REDBLACKS pick up their first win of the season on Sunday against the Toronto Argonauts, it would be enough to spring Cauz into the lead. There’s also room for him to gain/go further ahead if it all works out for him this week with the Calgary Stampeders-Winnipeg Blue Bombers showdown on Saturday, where Cauz has the Bombers staying undefeated and Steinberg sees the Stamps handing the defending Gray Cup champs Their first loss of the season.

The other side of this, of course, is that it could all play out incredibly well for Steinberg. If Hamilton, Calgary and Toronto win this week, that alone would push the leader up to 23 wins on the season and give him a little wiggle room against the rest of the pack.

It’s no doubt something that all of the other writers will be watching closely, as with the exception of Chris O’Leary (15-12), they’re all within striking distance of the lead.

Let’s take a look at this week’s games. 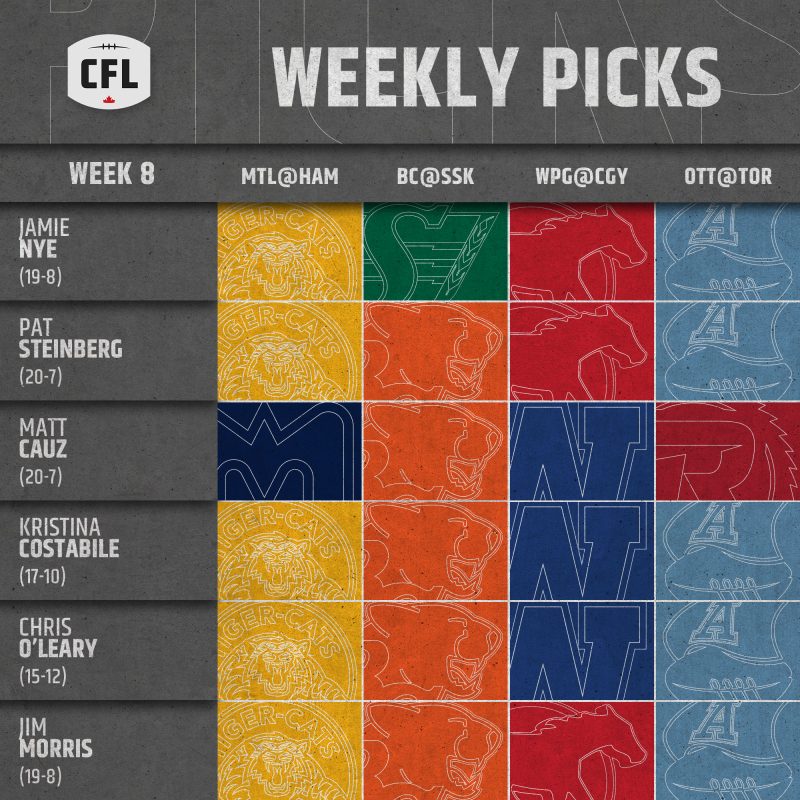 The Ticats are chasing their second at-home win of the season, but the Alouettes come into the game with some momentum, having kept the REDBLACKS winless last week in Ottawa. Trevor Harris put together his best outing of the season in that high-scoring win last week, with 341 passing yards, two touchdowns and an interception-free showing for just the second time since he’s taken over as the Als’ starter. The Ticats had a shot at a big upset win last week in Vancouver, but turnovers and an inability to cash in on a late interception left them empty-handed for the fifth time this season. Still, the majority of the writers think this week will be different.

It’s strange to see an almost entirely orange block when the Riders are playing at home (where they’re 3-1 at Mosaic), but QB undoubtedly dominated the decision-making for this game. As the picks were made Monday and into Tuesday morning, the status of Cody Fajardo remained up in the air. Even if he is on the field this week, would he have his usual mobility and effectiveness? What about any lingering fatigue issues tied to COVID-19? Fajardo could be fine and this could all be for naught, but when the opponent is Nathan Rourke and the 4-1 Lions, those Saskatchewan uncertainties feel a lot heavier.

Another week, another main event draw for the Blue Bombers, who handed the Stamps their first loss of the season just two weeks back at IG Field. There are two trains of thought here. One is that the Bombers can’t win every single game this regular-season and that they’ll inevitably have a game where they look both human and aren’t able to make up the difference. And why not against a rested Stamps team that was one Kamar Jorden end zone reception away from the chance of taking the Bombers to overtime? The majority of the writers went on that Calgary train two week ago. Now, with the Bombers at 7-0, it’s a more difficult sell.

Is this the week? The REDBLACKS have been knocking on the door of a win all season, but haven’t had the answer yet. They’re in tough this week against an Argos team that has strung together a tough pair of wins over the Riders. For all of their inconsistencies, the Argos have been very good at BMO Field, where they’re 8-2 going back to last season. Caleb Evans has played decently in the wake of Jeremiah Masoli’s injury; is this the week we start to see more of Nick Arbuckle at QB? Is he ready? Whoever’s in for the REDBLACKS, Matt Cauz thinks they’ll get it done. He boldly stands on his own with this pick.