Paleontologists have found several fossilized bones of plesiosaurs — traditionally thought to be sea creatures — in the Kem Kem beds, a 100-million-year-old river system in what is now Morocco. 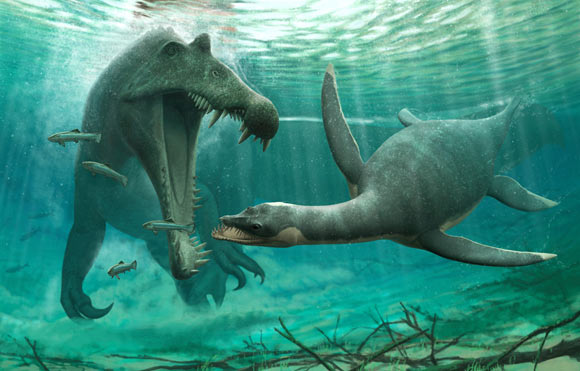 An artist’s impression of Spinosaurus and a plesiosaur in a river. Image credit: Nick Longrich / University of Bath.

Plesiosaurs (‘near to lizard’ in Greek) are a group of extinct marine reptiles that roamed the vast seas of the Triassic, Jurassic and Cretaceous periods, from 235 to 66 million years ago.

Their fossils have been found on every continent on Earth, with key discoveries made in Australia, Europe and North America.

The Kem Kem plesiosaurs belong to Leptocleididae, a group of small-bodied plesiosaurs that were widely distributed in nearshore and non-marine settings in the Early Cretaceous epoch.

“These fossils are the first freshwater plesiosaurs from Morocco, and are among the youngest representatives of Leptocleididae,” said University of Bath paleontologist Nick Longrich and his colleagues.

The plesiosaur fossils from the Kem Kem beds include bones and teeth from 3-m long adults and an arm bone from a 1.5-m-long baby.

“It’s scrappy stuff, but isolated bones actually tell us a lot about ancient ecosystems and animals in them,” Dr. Longrich said.

“They’re so much more common than skeletons, they give you more information to work with.”

“The bones and teeth were found scattered and in different localities, not as a skeleton. So each bone and each tooth is a different animal. We have over a dozen animals in this collection.”

The Kem Kem fossils hint that these creatures routinely lived and fed in freshwater, alongside frogs, crocodiles, turtles, fish, and the huge aquatic dinosaur Spinosaurus.

These fossils suggest the plesiosaurs were adapted to tolerate freshwater, possibly even spending their lives there, like today’s river dolphins.

“We don’t really know why the plesiosaurs are in freshwater,” Dr. Longrich said.

“It’s a bit controversial, but who’s to say that because we paleontologists have always called them marine reptiles, they had to live in the sea? Lots of marine lineages invaded freshwater.”

The findings appear in the journal Cretaceous Research.