SHINEDOWN frontman Brent Smith stopped the band’s concert in Ontario, Canada on July 22 and physically went into the crowd to break up a fight.

According to MusicLifeMagazine.net, the incident happened earlier in SHINEDOWN‘s 17-song set at the at History venue in downtown Toronto. Smith jumped into the audience to address the altercation, telling the aggressor to back off and chill. He then announced to the alleged victim that he would have them and their guest join the side stage to see the rest of the show.

Planet Zerowas released on July 1. The high-concept, viscerally charged album, produced by SHINEDOWN‘s Eric Basstakes a hard look at the divisiveness among those of differing ideologies, cancel culture ran rampant, the toxicity of social media, the need for honesty in our public discourse, and the corrosive effects of these things on mental health and humanity.

SHINEDOWN recorded Planet Zero during the pandemic, mostly in Bass‘s newly built Big Animal Studio in his home base of South Carolina.

Planet Zero‘s six predecessors have sold more than 10 million copies worldwide and all gone gold or better — double platinum in the case of 2008’s “The Sound of Madness”according to Billboard.

The next US leg of the Planet Zero world tour (produced by Live Nation) begins in Bonner Springs, Kansas on September 3 with special guests JELLY ROLL and John Harvie. The routing also includes festival performances at Louder Than Life on September 23 in Louisville, Kentucky and Aftershock on October 9 in Sacramento, California.

SHINEDOWN recently embarked on a Europe run of festival performances and select shows with IRON MAIDEN.

Brent stopping the show in Toronto to break up a fight Shindown
Sorry, it turns sideways so I hope you are watching on your phone lol (He disappeared into the crowd….) 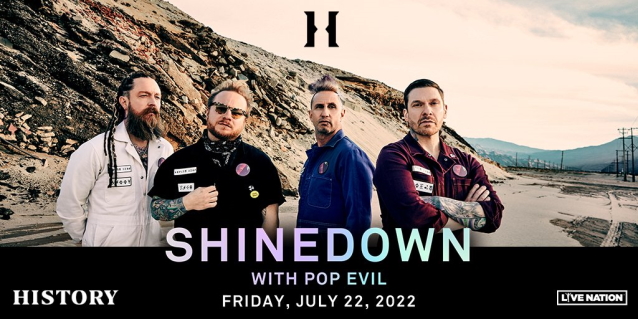