Wayne Gretzky is undisputedly the greatest hockey player of all time, with nine Hart Trophy wins, countless records to his name, and four Stanley Cup rings on his fingers.

But what happens when The Great One gets a chance to vote on the NHL Awards? Thanks to Gretzky’s work with TNT, we now know that answer.

Gretzky’s awards ballot, along with the nearly 200 other ballots submitted by the Professional Hockey Writers Association, were made public Wednesday — one day after Auston Matthews took home the Hart Trophy as league MVP.

Here is who Gretzky chose for hockey’s greatest individual honors.

Gretzky’s vote will do little to quell the debate over who the greatest active player is. McDavid continued to dominate the league this season, winning his fourth Art Ross in his seventh season but Matthews took the crown after becoming the league’s first 60-goal man in a decade. Regardless of which side of the debate you’re on, fans across hockey can look forward to both of these stars continuing to wow us for years to come.

This was the closest race of the year, with Josi actually receiving more first-place votes than Makar. But Makar benefited from a wider margin of second-place votes and took home what should be the first of many Norris trophies.

Zegras turned heads this season with some incredible viral moments, but Gretzky — like most voters — was impressed by Seider’s mature play on the blue line. Seider stepped into the Red Wings lineup and instantly became their best defenseman, scoring 50 points and making his presence felt with some big hits. He could be on some Norris ballots in the near future. 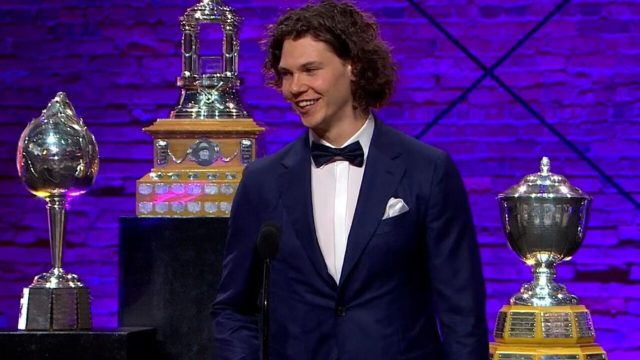 The NHL is full of talented two-way players but Bergeron has been the model everyone else has followed for most of his Hall of Fame career. With the win, Bergeron broke Bob Gainey’s record by winning the award for the fifth time. Kopitar, Gretzky’s pick, won it in 2018.

Being a gentleman of the game is a difficult thing to judge, so it’s interesting that none of the three finalists were on Gretzky’s ballot. Connor won the award after scoring 97 points and only recording four penalty minutes this season. Defensemen Jaccob Slavin — last year’s winner — and Jared Spurgeon were the other finalists.